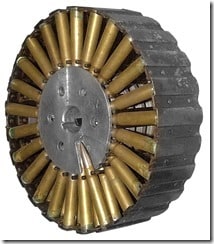 An Israeli company that makes gun accessories has won a court battle with Amazon over sales of counterfeit products.

Maglula, which makes magazine loaders among other items, filed suit against Amazon in 2019, claiming that the platform had been selling counterfeit products purporting to be from Maglula since at least 2016.

The lawsuit claimed that Amazon itself, rather than merely third parties using its platform, was the direct seller of some of the counterfeit goods.

Maglula alleged that it had repeatedly warned Amazon about the knockoffs of its patented and trademarked goods and had purchased samples via Amazon. The company said that it had explained to Amazon how to differentiate genuine products from fakes. Maglula also included some of its trademarks on Amazon’s brand registry. But according to Maglula, Amazon failed to take appropriate steps to stop sales of the fakes.

Maglula was able to present evidence of images of counterfeit products posted on Amazon’s website, showing that Amazon was both selling and shipping the fakes.

The complaint alleged that one such counterfeit product was even labeled as a counterfeit and arrived wrapped in an Amazon-branded bag. The loader had been returned to a liquidation center and then listed for resale by Amazon.

In 2020, a US district court ruled that Amazon must submit to an inspection of its inventory by Maglula. The order involved 33,000 “accused products” in 200 Amazon facilities. This is believed to be the first time a court made such an inspection order involving Amazon.

Amazon argued that the items in its facilities weren’t infringing because they hadn’t actually been sold yet. It also tried to block the inspection because of COVID and the “holiday rush.”

The judge added that “the court does not believe even the most persuasive presentation of Amazon’s evidence would make one iota of difference to a jury.”

The court had held that the arbitration clauses in Maglula’s two agreements with Amazon didn’t bar its IP infringement and counterfeiting claims.

The latest order, from the US District Court for the Eastern District of Virginia, denied Amazon’s motion for summary judgment.

The court found that Maglula did allege sufficient facts and provide sufficient evidence to show a genuine issue of material fact as to each of its causes of action.

The court also held that Maglula didn’t have to prove that each one of the allegedly counterfeit products was in fact counterfeit: “Plaintiff may instead show that a representative sample has been infringed upon to survive the motion for summary judgment.”

This is a straightforward counterfeit case. Simply put, a number of Chinese manufacturers did their best to create copies, or “knockoffs,” of Maglula products, packaging, markings, and literature, so that they could represent to Amazon that these knockoffs were genuine Maglula products. Amazon proceeded to sell these products online as genuine Maglula products. Maglula notified Amazon on multiple occasions, to no avail, that it was selling counterfeit products of inferior quality and ruining Maglula’s business.

The case was ordered to mediation, and the parties eventually settled.

Maglula has previously won court orders against Chinese companies for making and selling copies of its universal pistol magazine loader.