Will Congress back it? 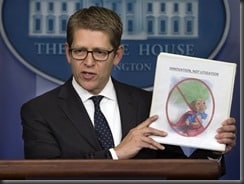 According to a blog in the Washington Post, Silicon Valley is unanimously enthusiastic about President Obama’s recently announced executive offensive against patent trolls.

Stanford Law School Professor Mark Lemley, Director of the Stanford Program in Law, Science and Technology, said that the White House had “done a good job of targeting real problems without attacking the patent system as a whole.”

VC Brad Feld said that the Obama administration “clearly understands the patent troll issue and is doing what it can to address the situation without having Congress have to change the law.” But Feld is concerned that Congress might block the President’s recommendations.

The blog author noted that some VCs may be reluctant to openly criticize patent trolls for fear of having their portfolio companies targeted by patent infringement lawsuits.

However, according to Corporate Counsel, some Silicon Valley lawyers were less enthusiastic about the President’s proposals. Some said that most of the proposals have been around for a while and questioned whether the more far-reaching ones had a chance of enactment.

Some Silicon Valley lawyers who defend patent cases said that they were pleased to see the President take a stand against patent trolls, but others suggested that the President was responding to pressure from Valley tech giants.

Lawyer Erich Spangenberg, head of IP Navigation Group, which has monetized patents for more than 600 clients since 2003, said, "This is not about protecting the innovator. It’s doing a whole lot to protect the big guy."