At least for a while 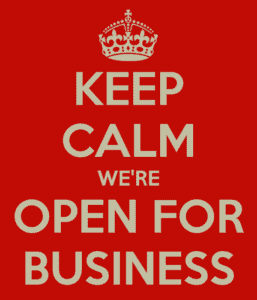 Despite the government shutdown, the US Patent and Trademark Office is expected to stay open for at least a few weeks.

This is because the USPTO is partially self-funded via fees that it collects for patent and trademark applications and related administrative matters.

However, the Office has only about four weeks of funds in reserve, and the money may not even last that long, as the Office notes on its website:

During the general government shutdown that began October 1, 2013, the United States Patent and Trademark Office will remain open, using prior year reserve fee collections to operate as usual for approximately four weeks. We continue to assess our fee collections compared to our operating requirements to determine how long we will be able to operate in this capacity during a general government shutdown. We will provide an update as more definitive information becomes available.

Should we exhaust these reserve funds before the general government shutdown comes to an end, USPTO would shut down at that time, although a very small staff would continue to work to accept new applications and maintain IT infrastructure, among other functions. (Should it become necessary for USPTO to shut down, details of the agency’s plan for an orderly shutdown are available on page 78 of the United States Department of Commerce’s shutdown plan, available here.)

Any new or updated public information related to USPTO operations during the government shutdown will be placed on this page.

At least the USPTO website is still up and running, unlike the sites of other government agencies including the Copyright Office.

Also, the 18th Annual Independent Inventors Conference originally scheduled for October 11th and 12th has been cancelled but is expected to be rescheduled. The current government shutdown began October 1. The last US government shutdown, in 1996, lasted for 28 days. According to a report from the Congressional Research Service, the previous shutdown cost $1.4 billion, or $2.1 billion in today’s dollars, mostly due to back pay to federal workers furloughed during the shutdown.