The best of the weird: 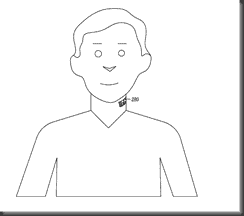 Some of the world’s top tech companies have filed patent applications – and some have already received patents — for gadgets that seem weird today but may soon be coming to an e-commerce site near you.

Motorola Mobility is seeking a patent for “Coupling an Electronic Skin Tattoo to a Mobile Communication Device”:

The electronic skin tattoo can include an embedded microphone; a transceiver for enabling wireless communication with the MCD [mobile communication device]; and a power supply configured to receive energizing signals from a personal area network associated with the MCD.

The tattoo would be able to pick-up vibrations from the speaker’s throat – eliminating both annoying background noise and annoying people who talk too loudly on their cell phones. Motorola says that the device would be especially useful for “large stadiums, busy streets, restaurants, and emergency situations.”

Motorola also claims that the tattoo can be used as a lie detector, by measuring electrical changes in the skin. The patent application does not suggest contexts in which an embedded lie detector would be desirable to consumers.

Sony has filed a patent application for a “Wearable Computing Device” with hair, a.k.a. the “smart wig.”

According to Sony, wigs are better than over other types of wearable computers:

The wig could be uses to guide blind people by tapping them on the head, according to Sony.

Google has figured out how to monetize the view from its Google Glasses. In 2013 the company received a patent for its “gaze tracking system.”

The patented method would allow the determination of whether something a viewer is looking at is an advertisement and enable charging advertisers on a “per gaze” basis.

The method could also allow detection of whether a user looked directly at an ad and for how long, could provide feedback to advertisers on whether a given ad draws or holds the user’s gaze, and can even determine whether an ad evokes an emotional response.