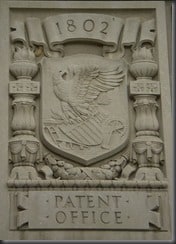 In Liberty Mutual Insurance Co. v. Progressive Casualty Insurance Co., the US Patent and Trademark Office’s Patent Trial and Appeal Board (PTAB) cancelled all claims under review, finding that if at least one claim is directed to a covered business method patent then all claims of the patent are eligible for covered business method (CBM) patent review.

Under the America Invents Act (AIA) a CBM patent

is a patent that claims a method or corresponding apparatus for performing data processing or other operations used in the practice, administration, or management of a financial product or service, except that the term does not include patents for technological inventions.

The AIA does not define what a patent for a technological invention is, and so the US Patent and Trademark Office has promulgated the following rule:

In determining whether a patent is for a technological invention, the following will be considered on a case-by-case basis:  whether the claimed subject matter as a whole recites a technological feature that is novel and unobvious over the prior art; and solves a technical problem using a technical solution.

A person or entity charged with infringement of a CBM patent may petition for a CBM review of the patent.

Liberty Mutual petitioned for CBM review of all 20 claims of a Progressive patent for a method for determining a premium for auto insurance based on data transmitted from a car about the operation of the car and the driver’s behavior. This method allegedly provides a more precise and fair process for differentiating between drivers and customizing premiums.

Progressive had previously sued Liberty for violation of the patent at issue.

Liberty initially asserted 422 grounds for unpatentability. The PTAB issued orders denying certain grounds and requiring Liberty to select a subset. In its second CBM petition, Liberty focused on obviousness, based on a newly cited prior art reference.

In reviewing 10 grounds for the first proceeding and all grounds for the second proceeding, the PTAB rejected Progressive’s argument that a claim-by-claim analysis was required before institution of a CBM review.

The PTAB also denied Progressive’s motion to exclude evidence not originally relied on in Liberty’s CBM petitions, saying it was proper for a petitioner to cite to new evidence in response to arguments raised by the patent owner if that response “makes an argument that reasonably could not have been anticipated by the Petitioner.”

In its final decision on the second CBM proceeding, the PTAB cancelled all claims of the patent as being obvious.