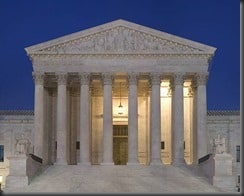 As we previously reported, last fall the US Supreme Court granted certiorari petitions in two cases involving the award of attorneys’ fees in patent cases.

Under the Patent Act, a court may award reasonable attorneys’ fees to the prevailing party in “exceptional cases.”

However, the Patent Act fails to define what an “exceptional case” is.

According to the case law that developed applying the Act, a case was considered “exceptional” if the litigation was:

· Brought in subjective bad faith, and

In the past, courts have found that very few patent cases met this standard and thus courts rarely awarded attorneys’ fees to the prevailing party.

It has been argued that this created an unreasonably friendly environment for “patent trolls” who file lawsuits based on patents of questionable validity, or when infringement is unclear, in order to “extort” settlement and licensing fees from the alleged infringers.

In the Octane Fitness case, a federal district court granted the defendant’s motion for summary judgment of non-infringement but denied its motion for attorneys’ fees. The Federal Circuit affirmed.

In its opinion, the Supreme Court held that the framework applied by the Federal Circuit was “unduly rigid and impermissibly encumbers the statutory grant of discretion to district courts.”

The Supreme Court ruled that an “exceptional” case is one that

stands out from others with respect to the substantive strength of a party’s litigating position (considering both the governing law and the facts of the case) or the unreasonable manner in which the case was litigated.

The Court noted that district courts have discretion to determine whether a case is “exceptional” on a case-by-case basis.

In the Highmark case, the accused infringer also prevailed on summary judgment after spending years in litigation and millions of dollars in legal fees. The district court found that the case was exceptional and merited the award of attorneys’ fees, but the Federal Circuit reversed, on the grounds that at least parts of the plaintiff’s case weren’t frivolous.

In its decision, the Supreme Court ruled that appeals courts should be more deferential to district courts when reviewing awards of fees in patent cases.