For the Very First Time 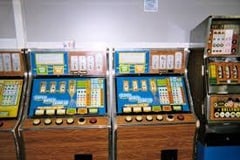 Bingo, who is the assignee of U.S. Patent Nos. 6,398,646 and 6,656,045 (computer-implemented methods and systems for bingo games), filed an infringement action against VKGS LLC. The District Court granted VKGS’s motion for summary judgment of non-infringement, and the case was brought to the Federal Circuit.

Writing for a unanimous panel, Judge Hughes applied the two prong test from the recent Supreme Court decision in Alice Corp. v. CLS Bank to determine the patent-eligibility of the claims. In applying the first prong of the test, the court found that the claims were directed to the abstract idea of “managing a game of Bingo ” because the invention was similar to the methods of organizing human activity that were historically found by courts to be abstract ideas (e.g. in cases such as CLS Bank and Bilksi).

In applying the second prong of the test, Judge Hughes noted that the claims require physical components including “a computer with a central processing unit,” “a memory,” “an input and output terminal,” “a printer,” and so on. However, as already established in CLS Bank, implementation of an abstract idea on generic computer hardware does not “impart patent-eligibility.” Consequently, the claims lacked an inventive concept that would make them patent-worthy. The patents were therefore held to be invalid.