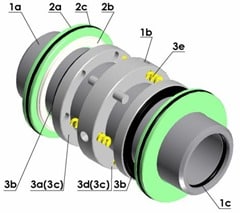 “likelihood of confusion” between trademarks can be precluded by rulings by the Trademark Trial and Appeal Board (TTAB). The case arose out of an almost 20-year dispute between two makers of metal fasteners — Hargis Industries, Inc. and B&B Hardware, Inc. Hargis makes fasteners for the construction industry, and B&B makes fasteners for use by aerospace companies.

B&B registered a trademark for fasteners using the SEALTIGHT trademark in 1993. Hargis attempted to register its own mark for SEALTITE in 1996, and B&B opposed it. As the Supreme Court decision noted;

Although there are obvious differences between space shuttles and A-frame buildings, both aerospace and construction engineers prefer fasteners that seal things tightly. Accordingly, both B&B and Hargis want their wares associated with tight seals.

The TTAB disallowed registration of the Hargis mark because of the likelihood of confusion with the B&B trademark. Hargis did not seek court review of the TTAB’s denial of its proposed registration. Later, when B&B sued Hargis for trademark infringement, B&B contended that Hargis was precluded from contesting the issue of likelihood of confusion between the two marks because the TTAB had already ruled on the issue.

A federal district court disagreed, and the Eighth Circuit affirmed, because the TTAB and the federal courts used different factors in determining whether there was a likelihood of confusion between two marks. The Supreme Court decided that giving trademark infringement litigants “two bites at the apple” was a waste of resources.

Sometimes two different tribunals are asked to decide the same issue. When that happens, the decision of the first tribunal usually must be followed by the second, at least if the issue is really the same. Allowing the same issue to be decided more than once wastes litigants’ resources and adjudicators’ time, and it encourages parties who lose before one tribunal to shop around for another.

Thus, any party seeking to contest a proposed trademark at the TTAB should consider this its only chance to prove likelihood of confusion and not merely a dry run for the “real” federal court case.