Yes, Legos Can Be Protected By Trademark

AWESOME FOR LEGO AS COURT

The General Court of the European Union has ruled that the shape of Lego figurines can be registered as a trademark.

The case comes in the wake of a similar recent advisory decision by the advocate general of the European Court of Justice that the shape of a Kit Kat chocolate bar is functional and cannot be protected as a trademark in the EU. 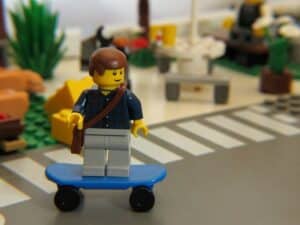 Under EU law, a trademark may be in the form of:

In 2010, the European Court of Justice rejected Lego’s application to have the 2×4 shape of Lego blocks recognized as a trademark.

The Court said then that:

The Lego brick is not registrable as a Community trademark. It is a sign consisting exclusively of the shape of goods necessary to obtain a technical result…. The most important element of the sign composed of the Lego brick is the two rows of studs on the upper surface of that brick, which are necessary to obtain the intended technical result of the product, that is to say, the assembly of toy bricks

Best-Lock argued that, as with the Lego blocks, the shape of the little figures was functional – they were designed so that they could attach to other Legos.

The EU Court disagreed, saying that the heads, bodies, arms, and legs of the Lego figures did not have a technical function:

the fact that the figure in question ‘represents a manikin’ and may be used by a child in a play context was not a technical result.

Lego formerly had patents on its blocks, but the last of these expired in the 1980s.

The case is Best-Lock (Europe) v OHMI – Lego Juris at the General Court of the European Union.

The aesthetic features of products can protected by:

However, it can be challenging to protect designs that are functional as well as decorative.