Will “Happy Birthday to You” Now Enter the Public Domain?

WILL A “SMOKING GUN”

PUT “HAPPY BIRTHDAY TO YOU” 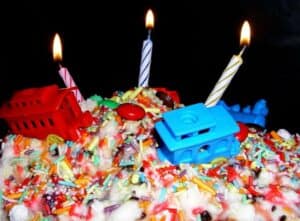 A lawsuit pending in California has aspects of a legal thriller: an underdog against a giant corporation, millions of dollars at stake… and now a smoking gun.

Filmmaker Jennifer Nelson is making a documentary about the song “Happy Birthday to You.” She was told by Warner/Chappell, a subsidiary of Warner Music Group, that she’d have to pay $1,500 for the rights to use the song in her film.

Instead of paying, she sued, seeking a declaratory judgement that the copyright for the song had lapsed.

In the words of her class action complaint,

This is an action to declare invalid the copyright that defendant Warner/Chappell claims to own to the world’s most popular song, Happy Birthday to You, to declare that Happy Birthday to You is dedicated to public use and is in the public domain, and to return millions of dollars of unlawful licensing fees collected by defendant Warner/Chappell pursuant to its wrongful assertion of copyright ownership of the song.

Warner/Chappell earns about $2 million each year from licensing the song. Some filmmakers have paid up to six figures for the right to use it.

The tune for “Happy Birthday” was written in the late 1800s, by a pair of schoolteacher sisters, and first published in 1893. The original lyrics had nothing to do with birthdays.

Warner’s claim derives from a 1935 copyright registration, from a company that obtained the rights from the sisters, for a piano arrangement that included the familiar birthday lyrics.

The smoking gun in the case was discovered just as the judge was about to issue a ruling.

The lawyers for the filmmakers say that they found an 88-year-old book of children’s songs in the Warner/Chappell digital library. The book included the “Happy Birthday” lyrics.

With this clue, they found an even earlier edition of the same book, published in 1922, with no copyright notice for the song.

The filmmakers claim that this means the lyrics were in the public domain before the 1935 copyright registration.

Warner/Chappell responded that the fact that the book was published didn’t mean that the owners of the copyright knew of the book or authorized it.

The judge is expected to rule shortly.