European Umbrellas Look Toward the West

Senz Technologies BV, a company based in the Netherlands, filed two applications for registration of a Community Design with the Office for Harmonisation in the Internal Market (Trade Marks and Designs), which d 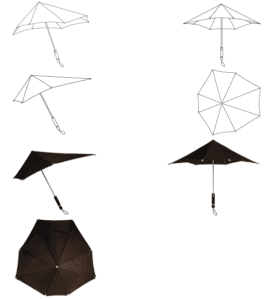 eals with design rights in the European Union.

The designs were for asymmetrical umbrellas which supposedly are more resistant to being turned inside out by the wind.

Another Dutch company, Impliva BV, lodged an application for a declaration that the designs were invalid.

According to the court’s opinion,

The intervener contended in particular that the umbrellas covered by the contested designs did not have individual character, because they make the same overall impression on the informed user as a certain number of umbrellas with an identical or similar shape which have been the subject of patents or designs registered and made available to the public prior to the registration of the contested designs.

Specifically, a US patent registered in 1996 was for a similar design.

a registered Community design is to be considered to have individual character if the overall impression it produces on the informed user differs from the overall impression produced on such a user by any design which has been made available to the public before the date of filing of the application for registration or, if a priority is claimed, the date of priority.

Thus, one issue was whether the US patent was “made available to the public” in Europe.

The court noted the following findings of the Board of Appeal:

First, the site of the USPTO register is accessible free of charge. Secondly, designs are known in the United States as ‘design patents’. Thirdly, it would be unwise on the part of those circles not to check whether prior art already exists in the American register, which is one of the most important registers of intellectual property rights in the world. Finally, the fact that the United States is the most important trading partner of the European Union makes it unlikely that the circles specialised in the sector concerned do not consult the USPTO register.

The court agreed that looking to the US for prior art was appropriate, but concluded that the umbrella design at issue was sufficiently different from the one covered by the US patent.

The takeaway is that a US patent can be used to challenge the registration of a design in the EU.