Patented robots — but what do we do about patents BY robots? 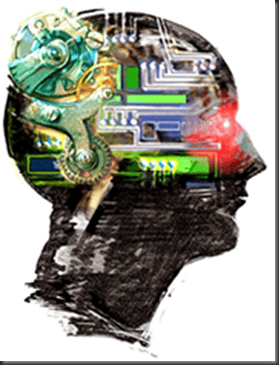 By Alejandro Zorrilal Cruz – http://lifeboat.com/images/artificial.intelligence.jpg, Public Domain, https://commons.wikimedia.org/w/index.php?curid=5594936 The intersection of patent law and artificial intelligence raises all sorts of interesting philosophical and practical questions. First of all, what do we mean by “artificial intelligence”? The term has a number of often-inconsistent definitions. For example, According to Live Science,

One of the standard textbooks in the field, by University of California computer scientists Stuart Russell and Google’s director of research, Peter Norvig, puts artificial intelligence into four broad categories:

A machine is sometimes said to be “intelligent” when it can pass the Turing test, developed by computer scientist Alan Turing in 1950. Applying the Turing test, an evaluator reviewing a text-only conversation between a computer and a human wouldn’t be able to tell which was which. Clearly, inventions incorporating artificial intelligence are patentable. According to CNET, the US Patent and Trademark Office granted IBM the most US patents for artificial intelligence in 2016 — 2,700 out of 8,088 IBM patents. Samsung, Canon, and Qualcomm were next on the list for new AI-related patents granted. AI applications (including robots) can already do the following things better than humans (at least according to the Huffington Post): AIs can write (really terrible) movie scripts. Artificial intelligence applications can even act like lawyers — doing contract review, for example. But can AIs create patentable inventions? US patent law defines an inventor as an individual or individuals who invented or discovered the subject matter of the invention. Congress stated that patent law is intended to cover “anything under the sun that is made by man.” If we consider an “individual” or “man” to encompass only human beings (of whatever gender), then a robot (or other AI application) could not be an inventor and thus could not be issued a patent. As we discussed in this blog, a selfie taken by a monkey doesn’t qualify for copyright protection. The Compendium of Copyright Office Practices says “The term “authorship” implies that, for a work to be copyrightable, it must owe its origin to a human being.” But could the inventor of the AI claim ownership of the patent rights in the AI’s inventions? What if the AI was self-aware — as in Westworld? Doubtless, these issues will be explored in law review articles, court cases, movies, and TV shows for years to come.