Court Refuses to Dismiss Copyright Case on “Fair Use” Grounds

when can you say that it’s art — 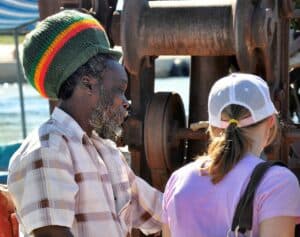 Others call him a serial copyright infringer.

As the New York Times reports, a federal court judge in New York refused to dismiss a case against Prince brought by a photographer.

The photographer, David Graham, took a photo that he called “Rastafarian Smoking a Joint.”

Prince’s “art” consists of printing other people’s Instagram photos (including the Graham image) on large canvases, adding his own comments.

In 2014, Prince presented a gallery show of these works. Graham filed a cease-and-desist order against Prince and then sued him for copyright infringement.

Prince and the gallery where the work was shown asked to court to dismiss the case, arguing that Prince’s work was “transformative” and thus allowed under the “fair use” exception to copyright law.

Prince contended that his use of the phot was “transformative” because

a “reasonable viewer” would recognize that Prince uses Graham’s photograph simply as “raw material,” … to convey a number of potential messages, any one of which is new and distinct from Graham’s effort to “capture[ ] the spirit and gravitas of the Rastafarian people.” These possible new messages include: “a commentary on the power of social media to broadly disseminate others’ work,” an endorsement of social media’s ability to “generate[ ] discussion of art,” or a “condemnation of the vanity of social media.”

Graham contended that Prince’s putting his photo in a social media frame and adding “a single line of what Prince himself calls “gobblygook” (“Canal Zinian da lam jam [emoji of a raised fist]”) cannot be transformative.”

The judge declined to dismiss the case, writing:

The primary image in both works is the photograph itself. Prince has not materially altered the composition, presentation, scale, color palette and media originally used by Graham.

A court cannot engage in the fair use inquiry until it has been presented with facts relevant to evaluating the fair use factors…. Due to the fact-sensitive nature of the inquiry, courts generally do not address the fair use defense until the summary judgment phase.

The decision is here.

Four other lawsuits have been filed by photographers whose work was used by Prince without their permission.

In a 2013 decision, the Second Circuit found that Prince’s work was in fact transformative and thus “fair use.”

Prince reportedly returned $36,000 that he had received for a blown-up Instagram post showing Ivanka Trump getting her hair done, saying that his own work was “fake” and that he “denounced” it.