may make it easier to 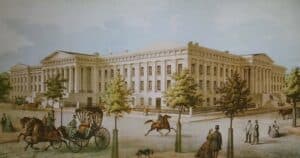 The US Patent and Trademark Office (USPTO) has issued a memo that changes the examination procedure pertaining to subject matter eligibility.

Because the memo refers to the recent Federal Circuit decision in the case of Berkheimer v. HP Inc., it’s being called the Berkheimer memo.

The memo directs patent examiners to abide by the holding in the case.

After the US Supreme Court’s decision in Alice Corp. v. CLS Bank International, the USPTO issued guidance that examiners should use a two-part test as part of the evaluation of patent claims:

2A – Determine whether the claim is directed to a judicial exception, such as a law of nature, a natural phenomenon, or an abstract idea.

2B – Determine whether any element, or combination of elements, in the claim is sufficient to ensure that the claim amounts to significantly more than the judicial exception.

The second part of the test has proven difficult to apply, as examiners don’t agree on what “significantly more” means.

According to the Federal Circuit, “[w]hether something is well-understood, routine, and conventional to a skilled artisan at the time of the patent is a factual determination.”

Thus, an examiner must now factually prove that any “additional features” of a patent claim are well-understood, routine, and conventional in order to support an “abstract idea” rejection.

According to the USPTO’s Manual of Patent Examining Procedure (MPEP),

an examiner should conclude that an element (or combination of elements) represents well-understood, routine, conventional activity only when the examiner can readily conclude that the element(s) is widely prevalent or in common use in the relevant industry.

This means that it should now be easier to show that claim is patent-eligible, as long as it’s novel and inventive.

The result may be fewer rejections of software-related patent claims.