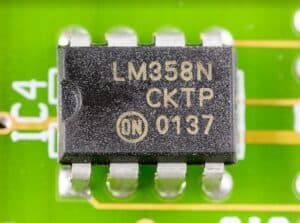 A patent for testing electronic circuits using a laser has survived a challenge that the subject matter was patent ineligible under 35 U.S.C. § 101.

A rejection under § 101 means that a court or patent examiner believes that the claims of the patent aren’t actually eligible for a patent.

Under the US Supreme Court’s 2014 decision in Alice Corp. v. CLS Bank Int’l, the first thing to be determined is whether the claim is directed to a  process, machine, manufacture or composition of matter. If not, then the claim isn’t eligible subject matter.

The second test is whether the claim is directed to a law of nature, a natural phenomenon, or an abstract idea. If so, the claim isn’t eligible subject matter.

The plaintiff, SEMICAPS, sued in federal court in the Northern District of California, alleging infringement of its ‘982 patent for testing electronic circuits using a laser.

The method allows detection of where defects exist on a semiconductor circuit.

The defendants moved to dismiss the case, arguing that the patent claims were for the abstract idea of collecting and processing data.

SEMICAPS countered that the claims were directed to “improving fault detection sensitivity in laser-based testing of integrated circuits.”

The court agreed with SEMICAPS that the claims were not abstract:

The ‘982 patent explains how advancements in integrated circuits, including the use of more metallization layers and materials with lower thermal conductivity, have resulted in the need for increased fault detection sensitivity. It describes the problems inherent with existing approaches and sets forth a new system for testing integrated circuits that enables the detection of otherwise undetectable response signals. …

[The claims] claim a step-by-step method to improve an existing technological process by which previously undetectable response signals may be detected and analyzed to pinpoint the location of a fault on an electronic circuit.

The court found that the method didn’t involve merely collecting data that already existed and was easily observable. Instead, the method allowed detecting signal responses that were otherwise undetectable.