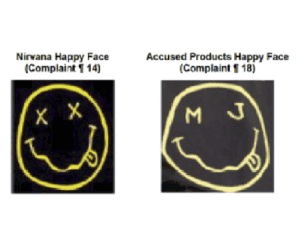 Nirvana claims ownership of the copyright for a “happy face” design originally created in 1991 by the band’s now-deceased former lead singer, Kurt Cobain.

The band also claims trademark rights for the design based on continuous use since 1992 to identify the band’s music and merchandise.

The clothing was sold by Saks Fifth Avenue and Neiman Marcus, among other retailers, which were also named as defendants.

The defendants moved to dismiss the claims, contending that:

Although the complaint was silent on the “important point” of “how or whether Mr. Cobain transferred his rights in the [Happy Face]” to Nirvana, the court found that this was not a “fatal” omission at the pleading stage and could be addressed by discovery and subsequent proceedings.

On the substantial similarity issue, the court found that both works included:

Thus, the court found that the plaintiff’s allegations as to substantial similarity were sufficient to survive a motion to dismiss.