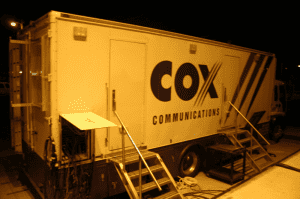 So Cox must pay one billion;

Says it will appeal

A federal jury in Virginia has ruled that Cox Communications should pay copyright infringement damages of $1 billion.

EMI, Warner Music Group, Sony Music and Universal Music sued Cox last year, alleging the mass piracy of 10,000-plus songs by the company’s subscribers. The labels say they sent “hundreds of thousands” of warnings about the infringement to the No. 3 cable provider before taking the issue to court. The jury in U.S. District Court for the Eastern District of Virginia found today that the infringement was willful and awarded $1 billion in damages — nearly $100,000 per infringed work.

The Recording Industry Association of America (RIAA), the trade association that represents the music industry, had alleged that Cox failed to enforce its own stated policies to deter repeat infringers. Fifty-three music companies joined as plaintiffs against Cox.

The suit was based on a list of Cox accounts that had received three or more infringement notices from Cox.

The Digital Millennium Copyright Act (DMCA) provides a “safe harbor” that shields online service providers (OSPs) like Cox from copyright infringement liability for actions by their users under certain circumstances.

Among other things, OSPs must:

As the court noted in ruling on the plaintiffs’ motion for summary judgement,

[o]ne contributorily infringes [a copyright] when he (1) has knowledge of another’s infringement and (2) either (a) materially contributes to or (b) induces that infringement.

The Fourth Circuit has ruled that “contributory liability can be based on willful blindness.”

The court found that the evidence showed that Cox had more than just “generalized knowledge” of infringement.

Cox has announced that it plans to appeal the verdict.