Gets lucky at Supreme Court; 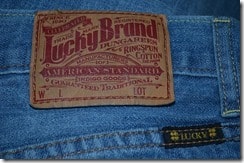 The US Supreme Court has ruled that issue preclusion doesn’t bar Lucky Brand from litigating a defense in a trademark infringement case that it failed to raise in an easier case.

The case, Lucky Brand Dungarees, Inc. v. Marcel Fashion Group, Inc., involves a dispute between Marcel and Lucky Brand, both of which sell jeans and other apparel. Both companies use the word “Lucky” as part of their marks on clothing.

Marcel received a federal trademark for “Get Lucky” in 1986. Lucky Brand began using the registered trademark “Lucky Brand” in 1990.

The companies have been fighting over the “Lucky” marks since Marcel sued Lucky Brand in 2001. That suit ended in a 2003 settlement in which Lucky Brand agreed to stop using “Get Lucky” and Marcel agreed to release any claims about Lucky Brand’s use of Marcel’s marks.

In the latest case, Lucky Brand successfully moved to dismiss based on the terms of the settlement agreement. Marcel appealed, arguing that Lucky Brand had failed to use that argument in a previous case.

As the Court noted,

This case asks whether so-called “defense preclusion” is a valid application of res judicata: a term comprising the doctrine of issue preclusion, which precludes a party from relitigating an issue actually decided in a prior action and necessary to the judgment, and the doctrine of claim preclusion, which prevents parties from raising issues that could have been raised and decided in a prior action.

Because the two suits here involved different marks and different conduct occurring at different times, they did not share a “common nucleus of operative facts.”