Single Prior Art Reference Must Be Self-Enabling 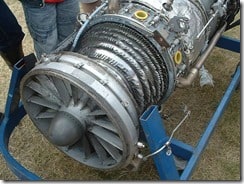 The Federal Circuit has reversed a decision by the Patent Trial and Appeal Board (PTAB) on unpatentability due to obviousness under 35 U.S.C. §103.

Raytheon owns a patent for gas turbine engines which are commonly used in airplanes. As the court noted,

a geared gas turbine engine with two turbines and a specific number of fan blades and turbine rotors and/or stages. The key distinguishing feature of the claims is the recitation of a “power density” range that the patent describes as being “much higher than in the prior art.”

One of the prior art references was Knip,

Although the construction of a turbofan engine incorporating such composite materials was undisputedly unattainable at that time (and, according to the record, continues to this day to be beyond reality), an imagined application of these “revolutionary” composite materials to a turbofan engine allowed the author of Knip to assume aggressive performance parameters for an “advanced engine,” including then-unachievable pressure ratios and turbine temperatures. … Knip predicts that the use of these composite materials would permit the resulting advanced engine to achieve significant reductions in engine volume and weight leading to “improvement in engine performance and thrust-to-weight-ratios.”

GE argued that both Knip and another reference

disclose performance parameters of a kind that would permit a skilled artisan to derive the power density of their respective engines from those disclosed parameters.

The PTAB determined that GE had met its burden of proving that two of the patent claims were unpatentable as obvious. It concluded that Knip rendered the claims obvious to a skilled artisan.

Raytheon appealed to the Federal Circuit. The issue before the court was whether the PTAB erred in finding Knip “enabling” of the claimed invention. I.e., was Knip enough to allow someone to build an engine like Raytheon’s?

Raytheon argued that the PTAB

The Federal Circuit agreed with Raytheon, noting that “Whether a prior art reference is enabling is a question of law based upon underlying factual findings.”

The court had previously held that “To render a claim obvious, the prior art, taken as a whole, must enable a skilled artisan to make and use the claimed invention.”

We have … previously expounded the principle that if an obviousness case is based on a non-self-enabled reference, and no other prior art reference or evidence would have enabled a skilled artisan to make the claimed invention, then the invention cannot be said to have been obvious.