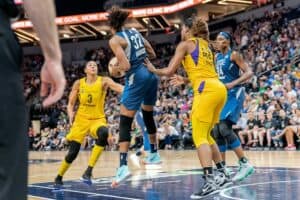 Rebekkah Brunson with a rebound in the Minnesota Lynx vs Los Angeles Sparks game at Target Center, the Lynx won the game 83-72. Brunson set the all time WNBA rebound record during the game. Photo:  Lorie Shaull.  https://www.flickr.com/photos/number7cloud/42338097185; https://creativecommons.org/licenses/by-sa/2.0/

Business methods
Are easier to patent
Since guidelines published

The  Revised Guidance for Subject Matter Eligibility  under 35 U.S.C. § 101, from the US Patent and Trademark Office (USPTO), which took effect in January, is already leading to an increase in the number of business method patents granted.

We discussed the new guidelines  here.

Business method patents are a class of patents which (not surprisingly) deal with methods for doing business. They can include patents for e-commerce, insurance, banking, etc.

Although business method patents are sometimes seen as a relatively new form of patent protection, they actually have quite a long history.

For example,  a patent for “A Mode of Preventing Counterfeiting” was granted in 1815.

Since the rise of the internet, the USPTO has found it harder to distinguish what’s a patentable “computer-implemented invention” versus what’s a non-patentable business method.

In the 1998  State Street Bank  case, the Federal Circuit rejected the idea that a  “method of doing business” was inherently unpatentable.

This led to something of a boom in business method patents, but also to an increase in criticism of such patents.

In 2014, the business method patent landscape changed significantly due to the US Supreme Court’s 2014 Alice decision.

In that case, the Court found patent-ineligible a form of electronic escrow, and announced a rather vague two-step test for determining what was patentable. Courts and the USPTO have been struggling with Alice ever since.

Allowances per office action (APOA) for business method patents dropped from 17% before Alice to 4% right after the decision.

The most recent stats, following the new 2019 guidance, show APOA  back at 17% — the pre-Alice level.