The COVID-19 Vaccines and Intellectual Property

and so are patent disputes, 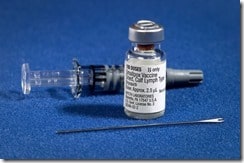 Finally, there’s some pandemic-related good news: of the dozens of potential COVID-19 vaccines in development, at least several appear to be highly effective.

As the New York Times reports,

Researchers are testing 58 vaccines in clinical trials on humans, and at least 87 preclinical vaccines are under active investigation in animals.

The UK recently became the first Western country to authorize a COVID-19 vaccine. The version made by Pfizer and its German partner BioNTech – shown to be 95% effective – will be widely administered this month, with millions of doses to be delivered before the end of the year, according to CNN.

In November, Moderna announced that its own vaccine was 94.1 percent effective.

With billions of dollars – and millions of lives – at stake, companies are hurrying to file patents to protect their COVID-related inventions.

However, given the rush to file, and the multiple simultaneous vaccine development tracks, it may be some time before it’s clear who owns what rights.

As the Times reported,

Moderna lost a patent dispute in July over some of their vaccine technology. The following month, the company stated that it could not be certain it was the first to make the inventions claimed in their patents, including its coronavirus vaccine.

Moderna, which had not included this language in previous quarterly investor reports, added that “publications of discoveries in the scientific literature often lag behind the actual discoveries, and patent applications in the United States and other jurisdictions are typically not published until 18 months after.”

Another vaccine patent-related issue is whether, and when, the patent owners will get paid for the use of their inventions.

Normally, anyone wanting to use a patented vaccine would have to negotiate a license upfront and pay the inventor a license fee. However, the World Trade Organization’s Trade-Related Aspects of Intellectual Property Rights (TRIPS) Agreement allows the use of patented material without a license, in certain situations.

is the most comprehensive multilateral agreement on IP. It provides for certain basic principles (such as non-discrimination), situates the IP system in terms of promoting innovation and disseminating technology for the public’s welfare, sets forth minimum standards of protection in respect of each of the areas of IP covered by the TRIPS Agreement, contains provisions that deal with domestic procedures and remedies for IP enforcement, and makes disputes between members about respect for TRIPS obligations subject to the WTO’s dispute settlement procedures.

Article 31 of TRIPS allows unlicensed use of a patented item (such as a vaccine) “in the case of a national emergency or other circumstances of extreme urgency.” The pandemic would certainly qualify for this exception.

However, this doesn’t mean that the patent owners won’t ever get paid for this unlicensed use of their rights. As the WTO notes,

Article 31 of the Agreement allows compulsory licensing and government use of a patent without the authorization of its owner under a number of conditions aimed at protecting the legitimate interests of the patent-holder. Patent-owners are, in principle, entitled to receive remuneration.

Several members of the WTO have amended their laws to grant compulsory or government-use licenses to COVID-19 treatments and vaccines. This may be especially important where a vaccine patent-holder can’t make enough doses of a vaccine (or enough at an affordable cost) to meet the global demand. As the WTO states,

Compulsory licensing may serve as a useful policy tool to increase access to eventual treatments or vaccines for COVID-19, in particular in situations in which from a member’s perspective access to affordable health technologies in sufficient quantities cannot be otherwise secured.