Not if they’re done right 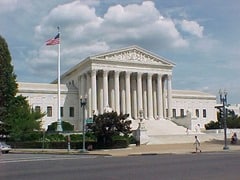 The US Supreme Court once again sent the Ultramercial case back to the Federal Circuit for reconsideration. The Electronic Frontier Foundation (EFF), an advocacy group that launched a campaign against software patents in 2012, says the Ultramercial case is the first major test for the Supreme Court’s recent patent ruling in the Alice vs. CLS Bank case. If the patent stands, the Federal Circuit will be insisting on business as usual. If it falls, many other abstract software and Internet patents should soon fall with it.

Ultramercial, an online advertising company, holds a patent, filed in 2001, for a “Method and system for payment of intellectual property royalties by interposed sponsor on behalf of consumer over a telecommunications network.” The system gives consumers access to premium content and public internet in exchange for the consumers’ engagement with advertising (the advertiser pays for access to the copyrighted content). The company claims that its method results in a click-through rate for online advertising above industry standards.

On September 2, the Supreme Court yet again sent the case back to the Federal Circuit, this time for reconsideration in light of Alice.

According to the EFF; “Patents like this one, which are the favorite weapon of patent trolls, should never have been granted in the first place. But since the USPTO has already flooded the system with thousands of similarly vague and abstract patents, we need courts to strike them down before they do any more damage.”

We agree that “vague and abstract” patents are bad. However, the solution is not to “throw out the baby with the bathwater,” by getting rid of all software patents, as the EFF suggests, but to draft non-vague, non-abstract software patents. And that’s what we do here at AEON Law.