Can You Copyright a Language? 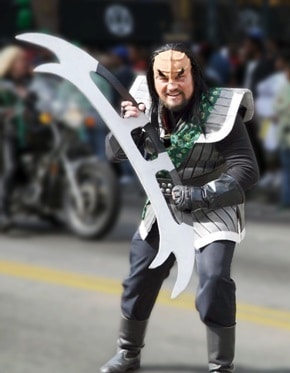 Studio wants to
Copyright a language;
say that in Klingon

The idea that someone could copyright a language might seem absurd at first. And obviously no one could get a copyright on a long-existing language, such as English or Chinese. But what if someone invented a new language from scratch? Could that be copyrightable?

Paramount argues yes. In a complaint filed against Axanar Productions, creators of a crowdfunded Star Trek fan film, Paramount charges Axanar with unauthorized usage of the Klingon language (among other things).

A conventional reading of copyright law would suggest that Klingon is NOT protectable with a copyright. US law says an “idea, procedure, process, system, method of operation, concept, principle, or discovery” is not eligible for copyright protection.

Copyright law lists nine different categories for “works of authorship” that can be protected by copyright. The only category remotely resembling a language is “literary works.” But is a language a “literary work?” Or is it a process? A system? Or a collection of facts, which is NOT copyrightable?

Spoken Klingon was invented in 1984 for the third Star Trek movie. Prior to that time, Klingons only made nonsense guttural sounds or spoke English.

Paramount paid for the development of Klingon, and it claims that the language is wholly fictitious and copyrightable. They argue that Klingon is not a “collection of facts” because it’s completely made up.

The company’s lawyer objected to the idea that Klingon was a useful system. He said, “This argument is absurd since a language is only useful if it can be used to communicate with people, and there are no Klingons with whom to communicate.”

The Language Creation Society has filed an amicus brief in the case. The amicus brief includes quotes in Klingon (using an alphabet made up by someone other than Paramount). LCS argues that Klingon is indeed a useful, living language:

The greater whole is a living community of Klingon speakers. In fact, there are groups of people for whom Klingon is their only common language. There are friends who only speak Klingon to each other. In fact, at least one child was initially raised as a native speaker of Klingon.

No US court has ever ruled on the copyright eligibility of a spoken language. The closest analog is computer languages, which have been held to be NOT copyrightable.

Google and Oracle have had a famous copyright fight over Google’s use of Java API’s. Even if Java itself is not copyrightable, the APIs are a particular expression in Java, and the court held they are protectable by copyright.

Paramount has made an effort to “’avwI’ tIghuHmoH” (“alert the guards,” in Klingon) over this “theft.” We’ll have to wait and see whether they succeed.