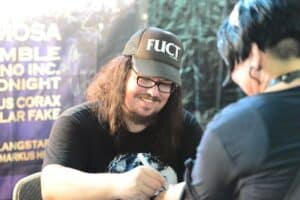 The US Supreme Court has ruled that the Lanham Act’s ban on federal registration of “immoral or scandalous” trademarks is unconstitutional under the First Amendment, which protects freedom of speech.

The case of  Iancu v. Brunetti  involved an attempt by Eric Brunetti to register the trademark FUCT for his clothing line.

As Justice Kagan humorously put it in her opinion,

According to Brunetti, the mark (which functions as the clothing’s brand name) is pronounced as four letters, one after the other: F-U-C-T. … But you might read it differently and, if so, you would hardly be alone.

Under the Lanham act, the US Patent and Trademark Office (USPTO) administers the federal trademark registration system.

The Lanham Act prohibits marks that “[c]onsist[] of or comprise[] immoral[] or scandalous matter.”

To determine whether a proposed mark is improper, the USPTO considers whether a

“substantial composite of the general public” would find the mark “shocking to the sense of truth, decency, or propriety”; “giving offense to the conscience or moral feelings”; “calling out for condemnation”; “disgraceful”; “offensive”; “disreputable”; or “vulgar.”

Both the examining attorney and the Trademark Trial and Appeal Board decided that the proposed FUCT mark failed the test. The Board, after reviewing Brunetti’s website, found that the mark communicated “misogyny, depravity, [and] violence.”

Justice Kagan noted that the Court had recently declared unconstitutional the Lanham Act’s ban on registering marks that “disparage” any “person[], living or dead.” In that case, an applicant sought to register “The Slants” for the name of his “Chinatown Dance Rock” band, as we discussed  here.

A core postulate of free speech law, she stated, is that “The government may not discriminate against speech based on the ideas or opinions it conveys.”

With respect to “immoral and scandalous” marks, the court concluded:

The statute, on its face, distinguishes between two opposed sets of ideas: those aligned with conventional moral standards and those hostile to them; those inducing societal nods of approval and those provoking offense and condemnation. This facial viewpoint bias in the law results in viewpoint-discriminatory application.

Thus, the court found this part of the Lanham Act unconstitutional.