Finally came to an end 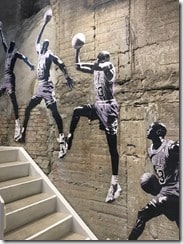 The 1980s saw the rise to stardom of NBA legend Michael Jordan. Michael’s last name was translated to “Qiaodan”, the sound of which in Chinese was similar to the sound of Jordan. Fans across the country referred to this prominent athlete as Qiaodan more often than his last name in English. Qiaodan was more frequently shown in the media which was widely accepted by the public.

In the late 2000s and early 2010s, Nike pursued intellectual property protection under Chinese law. The Chinese trademark law generally grants trademark rights on a “first-to-file” basis, unlike in US trademark law which requires a “first-to-use” basis, with proof the mark has been used in business. Nike’s Jordan-related applications were rejected since Qiaodan Sports had already registered those marks in 1997 when the company was launched, and neither Nike nor Jordan had objected to them for years.

In the hopes of invalidating Qiaodan’s marks, Nike, through Jordan filed lawsuits against the Chinese sports company in 2012. In December of 2015, the Chinese Supreme People’s Court rejected Michael Jordan’s claims that the Beijing High Court, Beijing First Intermediate Court, the Trademark Review and Appeal Board (“TRAB”) and the Trademark Office erred in rejecting his invalidation actions against Qiaodan Sport’s registrations for Qiaodan.[1] In the same year, Michael Jordan appealed.

In April of 2016, the Supreme People’s Court conducted a four-hour hearing to decide whether Qiaodan was equivalent to Michael Jordan and whether the Fujian company was trademark squatting. In December, the Court decided to withdraw partial decisions from the Beijing High Court, Beijing First Intermediate Court, the Trademark Review and Appeal Board (“TRAB”), and the Trademark Office. The Court also canceled the trademark composed of Chinese characters of Qiaodan.

In March of 2020, the Court ruled on Air Jordan v. Qiaodan that the trademark held by Qiaodan in class 25 and its logo were canceled.

Till now, the 8 years of litigation finally saw a closure. Though the outcome is good news for brand owners who are involved in the Chinese market, we may need to ponder more on the implications this case may bring.