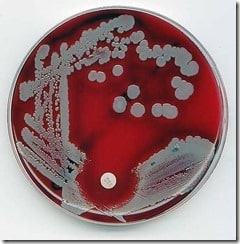 The Federal Circuit has reversed a decision by the US Patent and Trademark Office’s (USPTO’s) Patent Trial and Appeal Board (PTAB or Board) that patent claims involving antibiotic-resistant bacteria were unpatentable as obvious.

The case involved a patent application by the University of Strathclyde in Glasgow, Scotland.

Methicillin-resistant Staphylococcus aureus (MRSA), and other Gram-positive bacteria that have developed resistance to antibiotics, are “known to cause health problems, particularly in the hospital environment.”

The Centers for Disease Control and Prevention (CDC) have reported that “Approximately 5% of patients in U.S. hospitals carry MRSA in their nose or on their skin.”

It is usually spread by direct contact with an infected wound or via the hands of healthcare providers.

The University’s patent application explained that

effective methods of controlling transmission of and rising infection rates from antibiotic-resistant bacteria are “becoming one of the most significant problems within the healthcare industry.” … This is due, in part, to the “availability of few effective sterili[z]ation methods for environmental decontamination” of air and surfaces

Previous photoinactivation methods have used light in combination with a photosensitizer to kill bacteria. However, as the court notes, this method

suffers from “the significant practical disadvantage that photosensiti[z]ing agents must be applied to the bacteria that are to be inactivated.”

Scientists at the University of Strathclyde, recognizing this practical disadvantage, developed a method for photoinactivating antibiotic-resistant bacteria like MRSA without using a photosensitizing agent. Through numerous experiments, the inventors found that “[e]xposing [certain] bacteria to blue light, or white light containing blue light” having a wavelength in the region of 400–500 nm, “stimulate[s] an inactivation process.”

Clear-Vu Lighting petitioned for inter partes review of four claims of the University’s patent, including on the grounds that they were obvious in light of prior art. The PTAB agreed in part.

A person having ordinary skill in the art (PHOSITA), or “skilled artisan,” is a legal construct used to determine whether a claimed invention is “obvious” and thus unpatentable. Such a theoretical person is considered to have the skills and knowledge common in a technical or scientific field.

Whether the prior art discloses a claim limitation, whether a skilled artisan would have been motivated to modify or combine teachings in the prior art, and whether she would have had a reasonable expectation of success in doing so are questions of fact.

Given that the prior art relevant to the University’s invention at issue neither “teaches or suggests inactivation of any bacteria without using a photosensitizer,” the court concluded that a skilled artisan would not omit a photosensitizer when combining these prior art methods – especially since a prior photosensitizer-free method didn’t work:

Thus, not only is there a complete lack of evidence in the record that any bacteria were inactivated after exposure to 407–420 nm blue light without using a photosensitizer, there is also evidence showing that others had failed to inactivate MRSA—one of the claimed Gram-positive bacteria—without using a photosensitizer, despite experimenting with different light doses and different wavelength ranges of blue light. We have found that such failures undermine a finding of a reasonable expectation of success.

The Board found that a skilled artisan would have expected that MRSA could be inactivated by blue light without using a photosensitizer due to the presence of at least some amount of naturally produced porphyrin in the bacteria. We disagree. The only support for such a finding is pure conjecture coupled with hindsight reliance on the teachings in the ’706 patent.