A photo of Prince 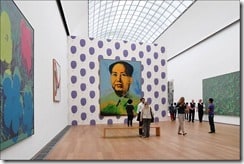 The U.S. Court of Appeals for the Second Circuit has held that a series of Andy Warhol prints based on a photo of the musical artist Prince were not fair use but infringed the copyrighted photograph on which they were based.

This is an important decision that may affect how the “fair use” defense will be interpreted in the future.

As the court notes, the case concerns

a series of silkscreen prints and pencil illustrations created by the visual artist Andy Warhol based on a 1981 photograph of the musical artist Prince that was taken by Defendant-Appellant Lynn Goldsmith in her studio, and in which she holds copyright.

In 1984, Goldsmith’s agency (“LGL”) licensed one of the photos to Vanity Fair magazine to use as an artist reference.

the term “artist reference” meant that an artist “would create a work of art based on [the] image reference. The license permitted Vanity Fair to publish an illustration based on the Goldsmith Photograph in its November 1984 issue, once as a full page and once as a quarter page.

Goldsmith didn’t know at the time that the artist in question was Andy Warhol.

Goldsmith did not learn until 2016 that Warhol, in addition to creating the image commissioned by Vanity Fair, created an additional fifteen silkscreen prints based on the photo. These became known as the Prince Series. Goldsmith only learned about the series after Prince died in 2016.

Goldsmith then notified The Andy Warhol Foundation for the Visual Arts, Inc. (“AWF”), successor to Warhol’s copyright in the Prince Series, that she believed the series violated her copyright in the photo.

The Court of Appeals noted that

Andy Warhol, né Andrew Warhola, was an artist recognized for his significant contributions to contemporary art in a variety of media. Warhol is particularly known for his silkscreen portraits of contemporary celebrities. Much of his work is broadly understood as “comment[ing] on consumer culture and explor[ing] the relationship between celebrity culture and advertising.”

Warhol is also known for his “pop art” images of consumer items like the Campbell Soup can.

The fair use doctrine seeks to strike a balance between an artist’s intellectual property rights to the fruits of her own creative labor, including the right to license and develop (or refrain from licensing or developing) derivative works based on that fruit, and “the ability of [other] authors, artists, and the rest of us to express them- or ourselves by reference to the works of others.”

Four main factors are considered under 17 U.S.C. § 107 in determining whether the use of a copyrighted work is “fair use”:

1. the purpose and character of the use, including whether such use is of a commercial nature or is for nonprofit educational purposes;

2. the nature of the copyrighted work;

3. the amount and substantiality of the portion used in relation to the copyrighted work as a whole; and

4. the effect of the use upon the potential market for or value of the copyrighted work.

The assessment of the first factor focuses on whether the use is “transformative”:

whether the new work merely supersedes the objects of the original creation, or instead adds something new, with a further purpose or different character, altering the first with new expression, meaning, or message….
Paradigmatic examples of transformative uses are those Congress itself enumerated in the preamble to § 107: “criticism, comment, news reporting, teaching . . ., scholarship, or research.” And, as the Supreme Court recognized … parody, which “needs to mimic an original to make its point.”

A common thread running through these cases is that, where a secondary work does not obviously comment on or relate back to the original or use the original for a purpose other than that for which it was created, the bare assertion of a “higher or different artistic use” … is insufficient to render a work transformative. Rather, the secondary work itself must reasonably be perceived as embodying an entirely distinct artistic purpose, one that conveys a “new meaning or message” entirely separate from its source material.

Though it may well have been Goldsmith’s subjective intent to portray Prince as a “vulnerable human being” and Warhol’s to strip Prince of that humanity and instead display him as a popular icon, whether a work is transformative cannot turn merely on the stated or perceived intent of the artist or the meaning or impression that a critic — or for that matter, a judge — draws from the work.

The court concluded that the Prince Series was not transformative and that it infringed Goldsmith’s photo.

The case is The Andy Warhol Foundation v. Goldsmith.